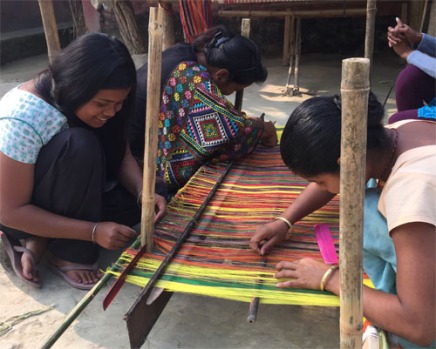 Traditionally women have played an important and dignified role in the Koch-Rajbanshi society, whether it is in the decision making process within the community or in terms of representing the family. It should be mentioned here that traditionally Koch society is a matrilineal society in which woman is the family head. However, at present except the Koches of present state of Meghalya, large section of the Koch-Rajbanshi people of plains area follow a patriarchal system. Moreover, due to influence of other cultures, Koch-Rajbanshi women have lost their past dignified position in the society. In some instances, they have become victims of dowry. CKRSD organizes workshops and discussions to sensitize issues like dowry and other important issues related to women empowerment in various Koch-Rajbanshi areas. One such workshop was held at Dumardoh in Dhubri district of Assam in collaboration with Actionaid. CKRSD also organizes skill building workshop for woman.