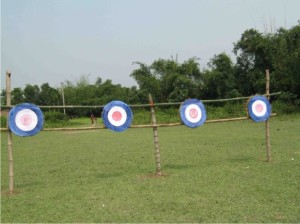 On September 30, 2012 the most awaited Sanatan Koch Memorial Best Archer competition was held in  Pakhirirtol Mat, Futkntibari of East Kamatapur. The event was jointly organized by Kamatapur Association(KA) and Centre for Koch Rajbanshi Studies and Development(CKRSD). This was organized with a view to popularize and preserve the traditional archery Practice among the Koch Rajbanshi community who were once known for their archery skills in South Asia. “One humbled aim of the competition is to create an environment of sports in the conflict ridden area of this part of the country and pay a tribute to the legendry Koch warrior Sanatan Koch”, said Bhabesh Chandra Roy of KA while talking to Kamatapur.com. It should be mentioned here that Futkibari is the area where Koch Rajbanshis have successfully resisted themselves from indulging in the recent conflict and played a very important role in prevailing peace in the area despite they were targeted by miscreants.

Around 300 participants took part in this historic event where age was not a bar. One specialty of the event was that only homemade bows and arrows were allowed in the competition. The event created lots of enthusiasm among people and a numbers of people came from West Kamatapur (North Bengal) to witness the historic event. Mahesh Roy a teacher from West Kamatapur said that they are too interested to organize such event in West Kamatapur next year. People from Guwahati, Bongaigaon, Sirang and Kokrajhar were also present in the event. Mr. Ruju Roy of Ghunghunikhata got 1st place and became the best Archer of 2012. Dalim Roy of Medhipara became the runners-up.

Sanatan Koch is a 17th century Koch Cheiftain from present Doihingry Village of Bajali Sub-division of East Kamatapur. Sanatan Koch declared war against the Mughals when Koch King Parikshit Narayan was captured by Mughals and was taken to Delhi. His revolt compelled Shahjahan to release the Koch King to avoid trouble in then Koch Hajo kingdom.